I am so awkward sometimes it hurts.

My husband, John, and I moved into our current neighborhood a few years back. It seemed amazing when we first arrived – lots of young families and the parents all seemed to be about our age or slightly older, and they all hung out with one another often! Amazing. We had only been living there for a few months when we were invited to our first neighborhood potluck BBQ.

Nervous but excited, we dressed in our summertime best and arrived a respectable 15 minutes late, to give things enough time to get going. We knocked but no one answered. Not hearing any party noise and not knowing what else to do, I tried the handle and poked my head inside the door to see a jam-packed crowd of neighbors.

I shut the door looking spooked, prompting my husband to ask, “Was no one in there?”

“Oh no,” I said. “The opposite.” I hoped he would sense my please don’t make me do this tone. He did not.

“Sweet,” he said, and walked into the party with our then two-year-old.

Great. Now I had no choice. With a sigh I entered.

My husband hadn’t gotten far; he was standing just inside the front door surveying the scene. I stepped forward to stand beside him and smiled and head-nodded to the strangers before us, who were apparently our neighbors.

“Have you seen any of these people before?!” I whispered.

“No, not even,” said John. Well, at least I wasn’t alone, I thought. We could get our plates and find a corner together, then politely slip out unnoticed among all the people.

Just then, John took two year old Kellan by the hand and led him to the kids’ playroom, effectively ditching me.

Great! Now I had no choice.

Then, some random dude approached me – standing all alone in the doorway, looking like an ass – and drunkenly asked what dish I had brought, peaking at the tin foil-wrapped platter in my hand.

“Ooooh,” he said, rubbing his belly. “Too spicy for me!” Then he turned on his heels and I was alone again.

Awkwardly, I made my way to the buffet table and moved some stuff to make room for my dish. I took my precious time unwrapping the foil before carefully folding it up in my hands. There, that was like 3 minutes, I thought.

I looked around but saw no one familiar. Then I spotted her! My very pregnant, sometimes friendly neighbor! I smiled and waved, and she raised her eyebrows in acknowledgment of me then turned back to her conversation. Ok. That’s worse. I turned back to the food.

At least the spread looked good. I grabbed a plate and began selecting the tastiest-looking morsels of bbq chicken wings, pasta salad, corn on the cob, and my favorite, baked beans. I took my time. I loaded up. I wasn’t even that hungry, but at least I looked busy. When my plate was pretty full and it was clear I had spent too much time with the food, I lowered my eyes (to avoid having to look at anyone) and turned to my left – just as a man about 8 inches away spun around to face me. I looked up and recognized a familiar face. And then the face smiled! Finally!

“Hiiii!” I exclaimed, grinning ear-to-ear with relief. I threw my arms in the air and pulled my male neighbor in for a big hug. When he chuckled and patted me mid-back I became suddenly aware that my breasts were smashed against the chest of a man I barely knew, whose pregnant wife only kind of liked me sometimes, in the middle of a party filled with every neighbor within a two mile radius, most of whom had no idea who I was but definitely knew who I was hugging. WTF had I done?

I pulled away hastily, and when I did, I upended my entire, mounded plate and watched as saucy baked beans tumbled to the floor and splatted on neighbor man’s sandaled foot.

“OhmigawdI’msosorry!” I exclaimed. He chuckled again and shook the beans off.

“Oops, let’s get that cleaned up!” bellowed the party’s hostess, coming to the rescue with a damp dish towel and plenty of pep.

Where the eff have you been, I thought. “Thank you so much,” I said, and then, “Sorry again.”

“No worries at all,” said male neighbor, clearly aware I hated myself.

I looked down at my plate, still mostly intact but missing beans, and thought for a second about going back to the buffet table.

“HAHAHA YEAH, RIGHT?!” I screamed, too enthusiastically. Then, in an almost-whisper, “I think I’ll go find John…”

I turned and made abrupt eye contact with very pregnant, sometimes friendly neighbor lady (wife of male neighbor/hug victim), who raised her eyebrows again, only this time she was not acknowledging my presence so much as staring death daggers at me in hatred. I averted my eyes and ducked into the kids’ play area, where I tagged out on adulting, sending my non-embarrassing husband into the party to make friends for us while I hid. 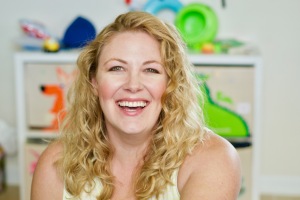 I’m a natural worrier who uses comedy to get through the tough moments in life, like childbirth and farting during sex. I love storytelling, drinking coffee, and chasing my dreams. Also love my husband, John, my sweet boy, Kellan, and the as-of-yet nameless little girl in my tum tum. Let’s be friends!